When is Mothering Sunday

The date of Mothering Sunday in UK varies every year. It does not correspond to the Mother's Day festival in US which falls on the second Sunday in the month of May. Mothering Sunday in England is always celebrated on the fourth Sunday of Lent (the 40 day period leading up to Easter) in honor of Mary, the mother of Christ.

Mothering Sunday Histroy in UK is centuries old. It goes back to the time of early Christians in England who celebrated a Mothers festival on the fourth Sunday of Lent in honor of Virgin Mary. Some believe that the ceremonies in honor of Roman mother goddess, Cybele were adopted by the early church to worship Virgin Mary, the Mother of Christ. Others say the Mother Church was substituted for Mother Goddess and according to a custom laid a person visit the church of his/her baptism (Mother Church) on this day.

The origin of Mothering Sunday can also be traced to the fact that in early times people in England as a tradition visited their nearest parish called, "Daughter Church" on every Sunday. Also in those times, in the 1600s, children after the age of ten left their homes for jobs as apprentice or domestic servants. It was considered important by the people that these children be allowed to visit their home and mother church once a year. Accordingly, once in a year, in the middle of the Lent the children were given a leave by their employers to visit their "Mother Church" or Cathedral of their hometown. These children on their visit to their homes brought along gifts, flowers and special cakes for their mothers. These visits thus became a time for family reunions and over a period time, this holiday meant for the return to Mother Church was stretched to include all mothers and was named as Mothering Sunday. 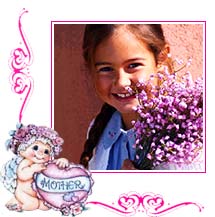 Today the festival of Mothering Sunday is the time when children give presents, flowers, cards and special cakes to their mothers to express their love and gratitude for their mothers. The festival has been commercialised to a great extent. People dine out with their mothers and those staying away call their mothers on phone to show their appreciation and love.

Mothering Sunday was also known as Refreshment Sunday because the fasting rules for Lent were relaxed on that day. Besides both Old and New testament lessons on mid-Lent Sunday made a point of food. The Gospel reading from the New Testament told the story of how Jesus fed five thousand people with only five small barley loaves and two small fish. (John 6:10-12)

In northern England and Scotland, people like to have carlings - pancakes prepared from steeped peas fried in butter, with pepper and salt. Therefore, in some locations this day was called Carling Sunday.

Simnel Cake is a special food item associated with Mothering Sunday. A Simnel cake is a rich fruit cake with a layer of almond paste on top and also in the middle. The cake is made with 11 balls of marzipan (a confection made of ground almonds or almond paste, egg whites and sugar, often molded into decorative shapes) icing on top representing the 11 disciples (Judas is not included). The cake was boiled in water, then baked. The Lenten fast dictated that the simnel cake be keep until Easter.

The word Simnel is said to have been derived from the Latin word "simila" which means a fine wheat flour mainly used for baking a cake. There is also an interesting legend associated with the use of the word Simnel. It says that once a man called Simon and his wife Nell had an argument over whether the Mothering Sunday cake should be baked or boiled. Ultimately, they did both. So the cake came be to named after both of them and was called, 'SIM-NELL'.