It's time to have fun by sharing some extremely hilarious Mother-in-law jokes with you all. Mothersdaycelebration.com has come up with a special section of jokes on mother-in-law to roll you out in laughter. You can also send these jokes to your friends or loved ones to make this mothers day a jovial and humorous moment. If you also have some special and rib-tickling jokes on mother-in-law then feel free to share with us.

A couple was going out for the evening. The last thing they did was to put the cat out. The taxi arrived, and as the couple walked out of the house, the cat shoots back in. So the husband goes back inside to chase it out. The wife, not wanting it known that the house would be empty, explained to the taxi driver "He's just going upstairs to say goodbye to my mother." A few minutes later, the husband got into the taxi and said, "Sorry I took so long, the stupid thing was hiding under the bed and I had to poke her with a coat hanger to get her to come out!" 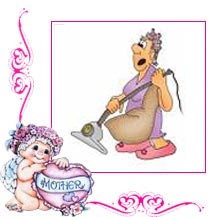 Save your Crocodiles
A man: "Your mother-in-law fell into my pond which has some crocodiles into".
The other man - "The crocodiles are yours, so you'll have to save them".

Poor Dog
A man: My mother-in-law was bitten by a dog yesterday.
Other Man: How is she now ?
First Man: She's fine. But, the dog died.

Big Game
A big-game hunter went on safari with his wife and mother-in- law. One evening, while still deep in the jungle, the lady awoke to find her mother gone. Rushing to her husband, she insisted on them both trying to find her mother.

The hunter picked up his rifle and started to look for her. In a clearing not far from the camp, they came upon a chilling sight. The mother-in-law was backed up against a thick, impenetrable bush, and a large male lion stood facing her. The wife cried, "What are we going to do?" "Nothing," said the hunter husband. "The lion got himself into this mess, let him get himself out of it."

Mothering Sunday was also known as Refreshment Sunday because the fasting rules for Lent were relaxed on that day. Besides both Old and New testament lessons on mid-Lent Sunday made a point of food. The Gospel reading from the New Testament told the story of how Jesus fed five thousand people with only five small barley loaves and two small fish. (John 6:10-12)

In northern England and Scotland, people like to have carlings - pancakes prepared from steeped peas fried in butter, with pepper and salt. Therefore, in some locations this day was called Carling Sunday.

Simnel Cake is a special food item associated with Mothering Sunday. A Simnel cake is a rich fruit cake with a layer of almond paste on top and also in the middle. The cake is made with 11 balls of marzipan (a confection made of ground almonds or almond paste, egg whites and sugar, often molded into decorative shapes) icing on top representing the 11 disciples (Judas is not included). The cake was boiled in water, then baked. The Lenten fast dictated that the simnel cake be keep until Easter.

The word Simnel is said to have been derived from the Latin word "simila" which means a fine wheat flour mainly used for baking a cake. There is also an interesting legend associated with the use of the word Simnel. It says that once a man called Simon and his wife Nell had an argument over whether the Mothering Sunday cake should be baked or boiled. Ultimately, they did both. So the cake came be to named after both of them and was called, 'SIM-NELL'.