There are several words which describe the personality of Julia Ward Howe, yet they all fail in their individual capacity or even in their collective might to define the remarkable woman as she was. The world knows Ms Howe as a writer, poet, playwright, essayist, travel writer, reformist, feminist, club woman. She was all rolled in one and much more.

She was a doting mother, an affectionate wife and powerful orator too. But Julia Ward Howe will always be revered for her contributions in bestowing dignity to women and motherhood. She was the first woman who fought for the official celebration of Mother's Day in US. In her various social capacities Julia tirelessly worked for justice throughout her life. She fought aggressively for the woman's right to vote and struggled to liberate women from the traditional confines of home. Apart from all this, she is renowned as the author of the famous song, 'The Battle Hymn of the Republic'. Julia Ward Howe: Childhood

Miss Julia Ward Howe was born in New York City on May 27, 1819 as the third of the six children to Julia Rush Cutler and Samuel Ward, a wealthy banker. Julia learnt French, Italian, German, Latin and Greek besides being tutored in literature, science and mathematics. She began a journey of self education after the age of sixteen. Julia began her writing career at the age of 20 when she wrote a literary criticism which was published anonymously in the Literary and Theological Review and the New York Review. 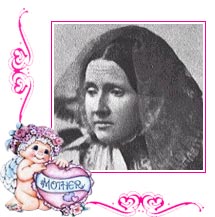 Julia lost her mother when she was only five. She thus came under the influence of her protective and religious father. Nevertheless Julia had her share of enjoyment and socialising. She became extremely popular for her pretty looks and mellifluous voice.

Julia faced more tragedies in the death of her father in the year 1839 and successive demise of a brother and a sister-in-law. These personal tragedies made Julia seek solace in religion.

In one of her visits to New England Institute for the Blind (later the Perkins Institute) Julia came to meet Samuel Gridley Howe, reformist, who was active in abolitionism and was the tutor of Laura Bridgman, the gifted blind, deaf-mute student. She was impressed by Howe though he was eighteen years her senior and suffered multiple handicaps. Inspite of several misgivings, the two got married in April, 1843.

Problems surfaced early in their marriage when Julia found that Howe placed her after his work and closed male friends. She began to feel stifled in her marriage. More so when she found that Howe did not take any interests in her writing careers and often discouraged her from pursuing her literary interests. The Howes first child was born in 1844 in Rome. The couple had five children in twelve years. A sixth, born later, died in early childhood. The family later moved to Boston. This proved to be a radical change for Julia. She now felt more freedom and enjoyed interactions with people and friends. The Howes stayed in the house named 'Green peace' by Julia between 1846 and 1864.

Over the years, the married life of the couple deteriorated. Samuel began to be rude to Julia and controlled her inheritance. The two even considered divorce, but Julia gave up the thought when Howe demanded the custody of two of their children. This according to Julia was her "greatest sacrifice".

Later in life, however, tensions between the husband and wife were dissolved. Howe began to be appreciate Julia work and accepted his marital transgressions. Julia's biography of her husband, 'Memoir of Dr. Samuel Gridley Howe', is full of praise for his character and achievements.

Julia published two anthologies of poems in 1848 much to her husbands displeasure. However, Julia got the opportunity to work with her husband for a short time in 1853 when he edited an anti-slavery journal, 'The Commonwealth'. Julia contributed social and literary criticism to the journal.

Julia's domestic unhappiness were highlighted in a collection of poems titled, 'Passion Flowers'. Though the book was published anonymously, the author's identity became an open secret. Julia Ward Howe came up with another collection of poems, 'Words for the Hour' in 1857. Her play, 'The World's Own' was performed in New York and Boston. Her report of a trip to Cuba was published in the New York Tribune in 1860.

It was on a trip to Washington, when the Howes went to watch a Union army review which was suddenly dispersed by a Confederate attack. On their way back Howes along with the others began to sing patriotic songs. James Freeman Clarke, a member of the group suggested to Julia that she write new and better lyrics for the tune of "John Brown's Body". In the hotel room, that very night, Julia Ward Howe wrote the words to the famous Civil War song, "The Battle Hymn of the Republic".

The song was published by The Atlantic in February, 1862. Julia was paid $5 for the same. Soon the song caught and swept the North. The Battle Hymn of the Republic, became an inspiration to Union soldiers fighting against slavery and is now the national anthem for freedom. 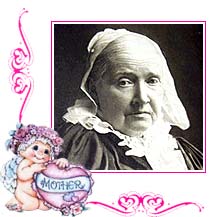 During the 1850's Julia came under the influence of William Lloyd's anti-slavery group. She along with her husband worked with the Sanitary Commission when the war broke out.

In 1868 Julia Ward Howe founded the New England Woman's Club along with Caroline Severance. She also began to attend meetings of New England Woman Suffrage Association and served as its president, 1868-77 and 1893-1910. In 1869 she and Lucy Stone led the formation of the American Woman Suffrage Association. She also presided over the Massachusetts Suffrage Association, 1870-78 and 1891-93 and made significant contributions to the Woman's Journal founded by Lucy Stone. These activities changed the outlook of Julia. She came to think more positively about womanhood.

During the Franco-Prussian war in the 1870s, Julia began a one-woman peace crusade and made an impassioned "appeal to womanhood" to rise against war. She translated her powerful Mothers Day Proclamation (written in 1870, Boston) into several languages and distributed it widely. Julia Ward Howe also went to London in 1872 to promote an international Woman's Peace Congress. In Boston, she initiated a Mothers' Peace Day observance on the second Sunday in June and held the meeting for a number of years. She rigorously championed the cause of official celebration of Mothers Day and declaration of official holiday on the day. Her idea was widely accepted but was later replaced by the Mother's Day holiday now celebrated in May.

Julia made extensive lecture tours and organized women's clubs wherever she went. In 1893, gave an address at the World Parliament of Religions in Chicago, titled "What Is Religion?" In 1908 Julia Ward Howe became the first woman to be elected to the American Academy of Arts and Letters.

Julia Ward Howe died on October 17, 1910. A large number of people came to pay their last respects to the pioneering woman in literature at the services held at Church of the Disciples and at Symphony Hall. A number of biographies are written on Julia Ward Howe and her name also appears in the 'Notable American Women' and 'American National Biography'.